So I came upon this thing from someone who wishes they were a 90's kid. 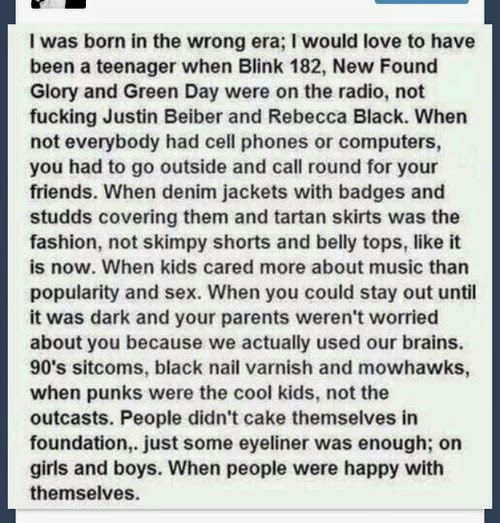 I'm taking this post to task because I get so tired of people romanticizing the past. Not only are they always wrong about almost everything. let's not forget about the negatives of the 90's. Like when no one in the US was allowed to marry someone of the same sex. When I hadn't even heard of trans and non-binary people. When we didn't have nearly as much access to the Internet, so if you were different than everyone in your community somehow, you didn't have support systems like Tumblr or access to information about yourself, whether you had a non-traditional gender identity or a mental illness. Also, you couldn't even order pizza online.

Most people who say they were born in the wrong era are saying that they wish they had been born a decade or more earlier. Which means that most of these people have a lot of unexamined privilege. The rest of us wish we had been born quite a bit later.

Posted by Not Sorry Feminism at 2:32 PM

The thing that makes me nostalgic for the 90's is because I was in high school then and it was the last time I had hope for the future. Most of that was ignorance, the world wasn't better, I just had less information about it. That hope felt nice though.

Guys in eyeliner were a 2000s thing. All of it was shitty.

Oh wow. Yep, landlines sucked, and I'm so old that when I was a kid most people didn't even have answering machines yet, and there was no call waiting. If you wanted to call somebody you had to hope you got lucky that they were home and not on the phone with someone else. And as you say, if your car broke down you were screwed - either start walking or hope somebody nice comes along to help you. Belly shirts were popular in the 1980s, when I was in high school, and then through the 90s as well, IIRC. And you're right, punks were never cool kids, and FFS, if this kid had ever even seen SLC Punk they would know that. This kid is describing some fantasy version of the 1990s that never existed.