Here is Another Good Thing - Cards Against Harassment

This Lindsey is not me but she is an awesome Lindsey. She just printed out some convenient business cards that she could pass out to street harassers. She even films herself confronting street harassers and passing out the cards. 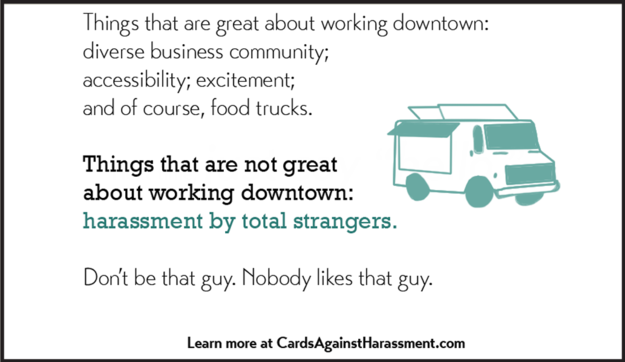 It's pretty badass, but I do want to point out that she has a lot of privilege that makes her activism safer than it would be for others. Confronting harassers always caries a risk, as they can become violent when they don't get what they want (which is generally to assert dominance over random women). This risk is higher for women of color and especially trans women, who experience a tremendous amount of violence, including deadly violence, from straight men who feel their masculinity threatened when they're attracted to trans women because they consider trans women to be men.

I haven't looked through her whole website so I'm not sure how much privilege checking she's done, but I feel like printing out and leaving around some nice little business cards for people to read is something I could do.

[Source]
Posted by Not Sorry Feminism at 4:42 PM